Bolougne Eastern Cemetery under construction circa 1918

If you have ever wandered into a village churchyard and seen a rather different gravestone with a military badge on it, chances are you are looking at a CWGC headstone. As the new Commonwealth War Graves Experience opens in Beaurains (outside Arras), France, Graham Bandy takes a look at the work of the Commonwealth War Graves Commission.

You may have been to France and Flanders or one of the 23,000 war cemeteries in over 150 countries, and seen the beautifully-cared-for graves in the many corners of many a foreign field.

The origins of the CWGC

The Commonwealth War Graves Commission (CWGC) was founded as the Imperial War Graves Commission (IWG) in 1917 by Royal Charter. Sir Vivian Ware was the main driving force behind it, along with several others including Rudyard Kipling who wrote the epitaphs for the memorials, including “Their name liveth for evermore” and “Known unto God” which is seen on the many “unknown” graves. He of course lost his son Jack in 1915, and he was only recently identified. The IWGC was the result of a question that haunted the government of the time. What to do with the bodies of the ever mounting dead from the battlefields of The Great War? 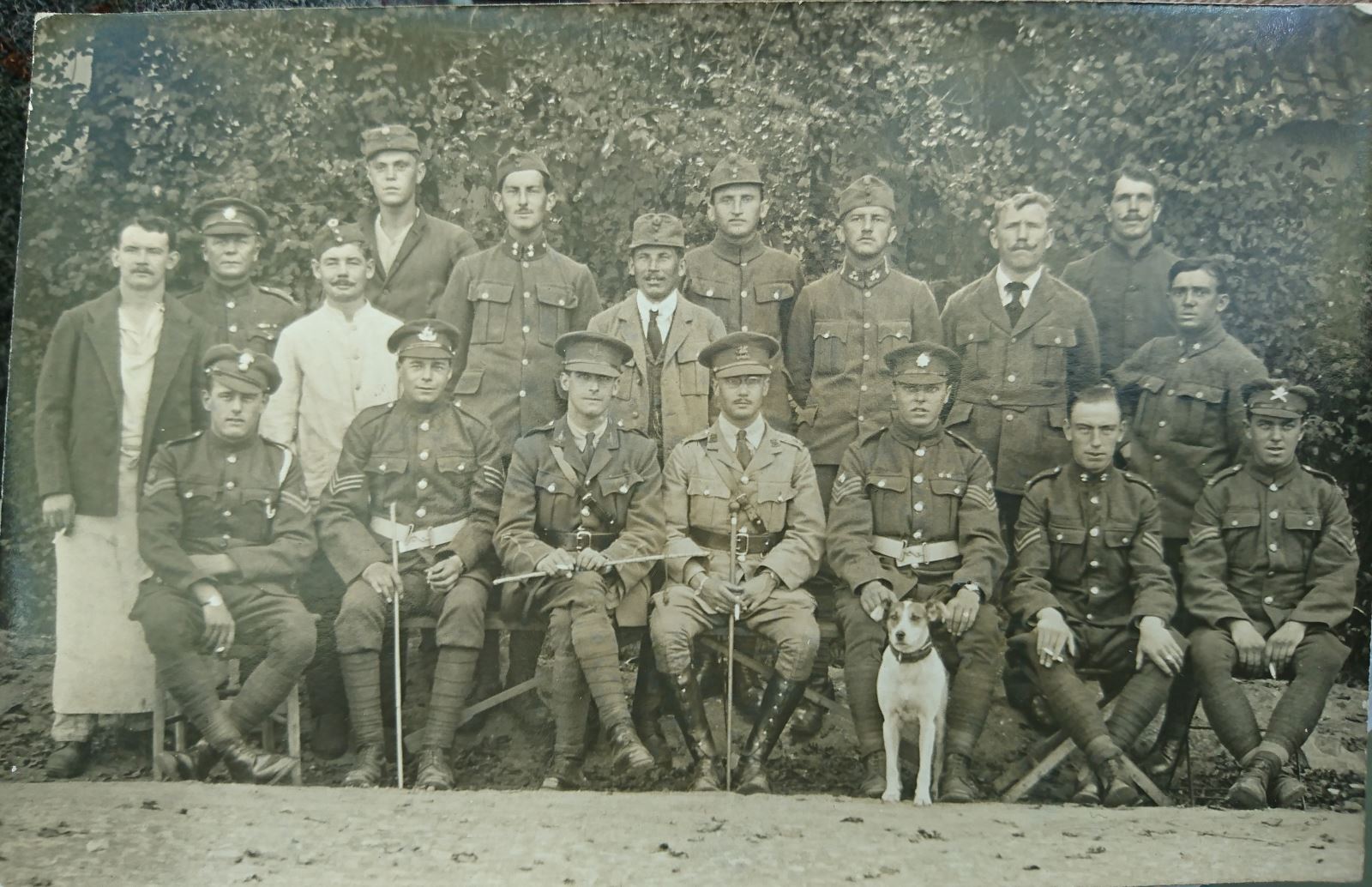 For millennia, battles have been fought and the bodies of the slain have been left where they fell. In later years they were placed into burial pits on the field of battle, after they had been scavenged and plundered by the victors and the locals.

As time went on, questions of commemoration were raised, and the first memorials to the dead other ranks, rather than just generals and other officers, began to be raised during the second Boer War (1899 -1902).

This became a “citizens war” where the “weekend warriors” of the Volunteers, and newly raised Imperial Yeomanry from the civilian populace, took to the field alongside the regular forces.

There are many towns and parishes that have either a statue to the fallen of the second Boer War or a memorial plaque with names upon, such as this one in the porch of Northampton Guildhall. 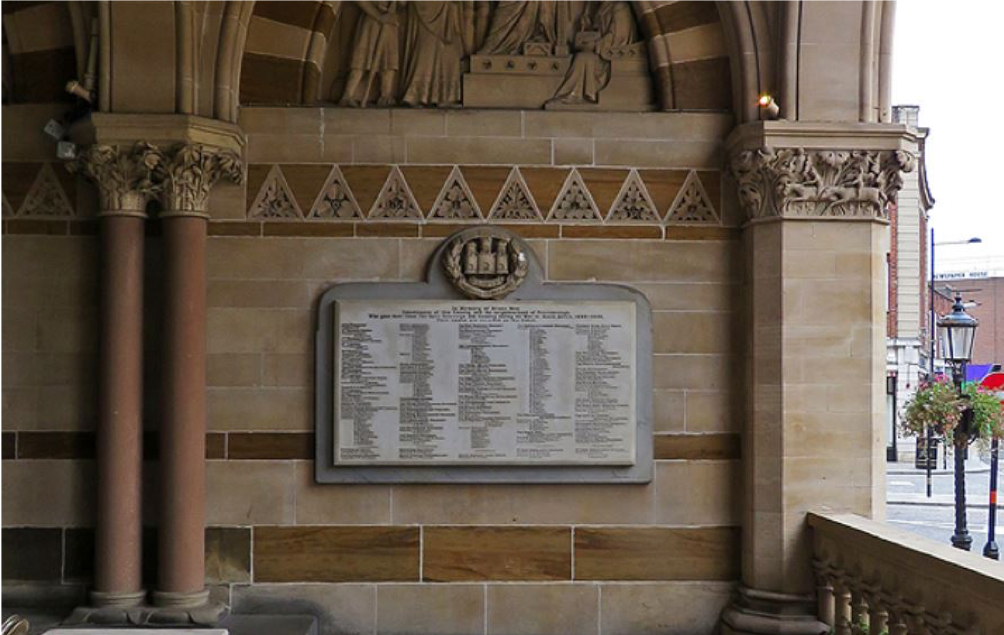 The enormous cost of bringing bodies back from the far-flung corners of empire were of course beyond the capabilities of any government, and thus units, regiments and friends bore the cost of local gravestones and memorials.

Then came The Great War - a war being fought over ground that had seen the victories of Henry V and his men at Agincourt, The Duke of Marlborough's army in the time of Queen Anne, and of course the Allied army under Wellington at Waterloo. This is the fertile soil where the sons of England and the rest of the British Isles had bled for centuries; and they would do so once again.

The dead from the early battles were quickly lain in village cemeteries to start with, and then battlefield graves. As time went on, the number of cemeteries began to grow around the Casualty Clearing Stations and Field Hospitals.

And so it was, that in 1917 the scene was set for the birth of the Imperial War Graves Commission.

The graves were initially marked by simple wooden crosses, some of which survive in a number of parish churches around the country. The pre-eminent architect of the time, Sir Edwin Lutyens, began to draw up the master plan alongside other eminent architects for these sites. He worked alongside his horticultural partner, Gertrude Jekyll to plan for the planting of the cemeteries too. It is he that is responsible for the “cross of sacrifice” markers in all of the cemeteries, as well as the edifices that stand to name the 320,000 that still have no known grave.

The work of the Commonwealth War Graves Commission

The CWGC only care for the dead of the two world wars and not the deaths that occurred in the “interbellum” years of the 1920s and 1930s. They also do not have the care of the post World War 2 deaths. They do however care for the 68,000 civilians who were killed as a result of enemy action during both wars.

This is now a huge responsibility, and the CWGC (renamed in 1960) employ their own staff, and gardeners in this work. Up until quite recently, you may have only seen a gardener or two tending the soil or cutting the grass in these walled gardens of remembrance, and that was probably all one knew of this highly-skilled organisation. For not only do they employ over 850 gardeners, but also blacksmiths, carpenters, and stonemasons amongst the 1,300 strong workforce.

The work of these “back-room boys” (and indeed girls) can now be explored at the CWGC Experience just to the south of Arras in Northern France. It is from here that all the work is undertaken and co-ordinated alongside head office in Maidenhead. You can now see the remaking of metal and wooden gates, the casting of bronze swords of sacrifice, the making of the iconic CWGC signs, the skilled lathe turning of finials and the important stone cutting, which is done both by hand and by four modern “pantograph” machines. These can cut any name and regimental badge in a shorter time, and thus each machine can produce up to five finished memorials a day.

Some back-room work does still take place behind closed doors though. This is the identification of recently found remains. As many as 40 bodies a year are recovered by the team at Arras, and depending upon the soil status there can be few remains or, a surprising amount for identification, from boots and uniforms, through web and leather equipment to even a still knotted silk tie that was recently found in a battlefield grave.

These fallen are not always DNA tested, but if some ideation of as to who the remains are of, it can be done to trace relatives. For instance, if a Northamptonshire Regiment badge is found alongside some other effects, it may be possible to tie down a unit to that location and a particular date. If other identification is found, such as a bracelet or other named items (yes, they can still be found intact!), then an almost positive ID can be made.

It is the exemplary work of these previously unseen workers that can now be seen, and indeed be in awe with at the new CWGC Experience.

After my pre opening trip, there is one thing I will say to the visitor. The CWGC Experience lies in the middle of the British operational area of the Great War, thus you need to be aware of bus loads of school children arriving before you, and these ravenous hoards ransacking the single  vending machine and coffee maker! There are plans, should the Experience take off, to extend, but at the moment, plan your luncheon before you visit.

The centre is open Monday to Friday from 1000hrs until 1600hrs