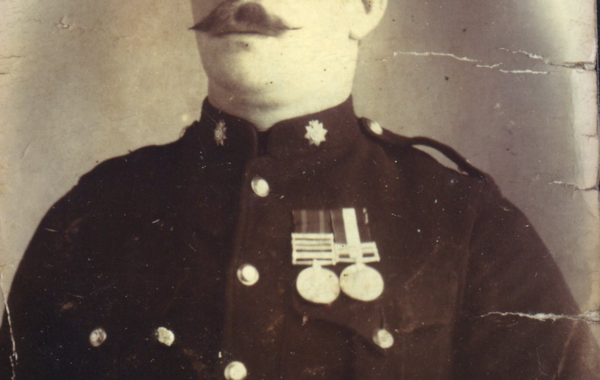 The one-to-one expert sessions are manned by professional researchers from AGRA (the Association of Genealogists and Researchers in Archives).

Family history enthusiast Elizabeth Jones wanted some help to chip away at the brick wall regarding her grandfather. We asked AGRA member professional researcher Mike Trenchard to share his thoughts on what the evidence reveals, and which leads Elizabeth can follow up next…

I am writing to request help with my brick wall regarding my grandfather Henry Thomas. I hope with some expert help and fresh eyes I may be able to move forward.

For many years I have been searching for my paternal grandfather Henry Thomas’s birth certificate so that I can establish who my great-grandparents are. On any documents I have, he gives his place of birth as Hackney, London, or just London. Family rumour says he was brought up in Wales by his aunt and the family were connected to the pilot boats in the Bristol Channel. This may be verified as he enlisted in the South Wales Borderers Militia (5615) on 29 January 1895 and he gave his address as St Woolas, Newport, Monmouthshire and his employer as Henry Ponsford a mariner. I thought that maybe the aunt could be Mrs Ponsford but I have been unable to make a connection.

On 12 November 1895 Henry enlisted for 12 years with the 1st Devonshire Regiment, again in Newport, Monmouthshire. He gives his next of kin as father, Jack Thomas (could be John) and two addresses: 28 Hackney Road, Hackney and Norfolk Garnde's Shoreditch. ‘Church’ is written – which I think could be St Leonard’s. Is Jack his parent or a relative connected to the church? I checked these addresses on the census but there were no Jacks or Thomases.

Henry left the Army in November 1907 in Gosport, Hampshire, and married my grandmother on 2 April in St Paul’s, Southsea, Hampshire. He gave his father as Albert Thomas, a draper.

I have found him on the 1911 Census, working in Netley, Hampshire, and his wife is with her parents in Southsea. On the 1901 Census he was in South Africa fighting in the Boer War (and not on the census). On the 1891 and 1881 Census returns, not knowing his parents’ or aunt’s name, I can’t be sure whether I have found him. About 1912/1913 Henry went to America or Canada to work and he was there when WW1 was declared. He enlisted in the Princess Patricia Canadian Light Infantry (PPCLI) in Ottawa on 24 August 1914 and he arrived back in the UK in November 1914 – he gave his date of birth as 25 April 1878, London.

I also applied to the 1939 Register (before it was public) to see the ‘top copy’ of Henry at his home address with family (34 Collingwood Road, Southsea) and it gave his date of birth as 25 April 1877. I have searched General Register Office (GRO) birth records for Hackney and Shoreditch from 1879 to 1876 with no joy.

I have viewed the original 1939 Register and I can see that Henry’s date of birth was amended to 21 April 1876 on 10 May 1951, with a reference of 37a EBA. I applied directly to Hackney Register Office for a birth certificate with that date and the best that came back was 11 April 1874.

What document did the 1939 Register use to make that amendment and how can I find it?

It would be good to solve the mystery of Henry’s birth and find his parents!

There is always a reason why children are brought up far away from their parents and it is often illegitimacy.  This may be the case with your grandfather Henry Thomas.  It can be challenging to find individuals with common surnames anyway and Thomas is a very common surname especially in Wales.

The General Register Office (GRO) now have a birth database on their website which gives the mother’s maiden name from 1837 to 1917: https://www.gro.gov.uk/gro/content/certificates/indexes_search.asp

You saw the reference EBA with the amendment to the 1939 Register in 1951. EBA refers to the department in Portsmouth, Hampshire.

There are plenty of instances were the informant for a record has not told the truth.

In his Military record for the Devonshire Regiment, his regimental number is 4508. He states that he has not lived away from his father for over three years. The record gives details of his marriage to Edith Eaton in 1910 and states that his father’s name is Jack Thomas. However his marriage certificate gives the name Albert Thomas for his father. If he was illegitimate he may not have known the name of his father. The military service record indicates he served in India and South Africa and the photograph of Henry Thomas shows him with the Queen’s and King’s South African Medals.

The military record also states that his employer prior to enlistment was Henry Ponsford, a mariner. The family story is that Henry Thomas was brought up by his aunt whose family were connected to the pilots in the Bristol Channel. In the 1891 Census (TNA Ref: RG 12/4377/53/10) a Henry Ponsford aged 69 is an inmate in the workhouse in St Woolos, Monmouthshire, maybe in the infirmary. He is described as a ‘Retired Mariner’, born in Bristol. It would be worthwhile carrying out more research on Henry Ponsford to see if it helps with the research.

The Militia Service Record for the South Wales Borderers show that Henry Thomas was 18 years and 9 months in January 1895. That would make his birth in 1876. There are two individuals named Henry Thomas born in the June Quarter of 1876 in the Shoreditch Registration District and obtaining these certificates could be a way forward.

If Henry’s father was Albert Thomas, a draper, as shown on the marriage certificate in 1910, it may be useful to look at trade directories for the Hackney area to see if this individual can be found. Similarly, electoral rolls for Hackney could be examined.

About the AGRA expert

How can I meet the team?

The great news is that you can come to meet AGRA members in person at Family Tree Live, which is taking place in the beautiful Alexandra Palace in London on 26-27 April 2019, so make sure you are prepared with all the right questions and copies of your notes before you set off for the show.

Get your tickets today by visiting here.