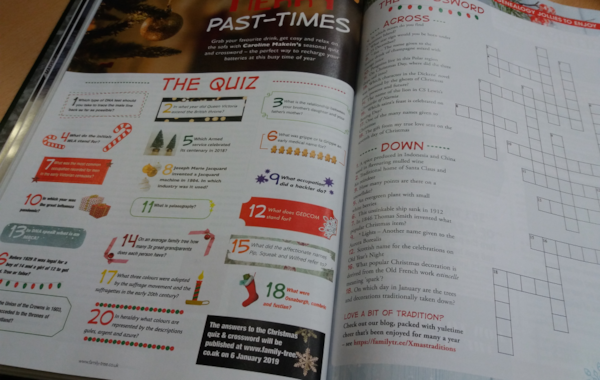 How did you get on in our family history quiz?

Discover how you got on in the Family Tree Christmas issue quiz and crossword. Find the answers below...

Discover how you got on in the Family Tree Christmas issue quiz and crossword. Find the answers below...

2.    1837- the same year that the civil registration of births, deaths and marriages began in England and Wales.

8.    Weaving, enabling the weaving of figured and intricate variegated patterns on brocade and damasks.

9.    A hackler was a flax dresser who used a metal spiked tool to split, straighten and comb out the fibres before the spinning process to produce linen thread for weaving.

11. It is the study and deciphering of old handwriting.

12. GEnealogical Data COMmunication. It’s a computer-readable  file of your family tree, which you can export from a family tree program on your computer or your online tree, and import into other programs or websites – where GEDCOM export and import is available.

13. Your Most Recent Common Ancestor.

4. In which ocean do you find Christmas Island? Indian

7. What star sign would you be born under on 25 December? Capricorn

8. * fizz. The name given to the festive drink of champagne mixed with orange juice. Bucks

11. On Christmas Day, where did the three ships sail into? Bethlehem

13. Which character in the Dicken’s novel was haunted by the ghosts of Christmas past, present and future? Scrooge

14. The name of the lion in CS Lewis’ Chronicles of Narnia. Aslan

15. Which saint’s feast is celebrated on Boxing Day? Stephen

17. One of the many names given to Christmas. Yule

18. The gift from my true love sent on the seventh day of Christmas. Swans

1 A spice produced in Indonesia and China used in flavouring mulled wine. Cinnamon

2 Traditional home of Santa Claus and his reindeer. Lapland

3 How many points are there on a snowflake? Six

6 This unsinkable ship sank in 1912. Titanic

9 * Lights. Another name given to the Aurora Borealis. Northern

12 Scottish name for the celebrations on Old Year’s Night. Hogmanay

18 On which day after Christmas are the trees and decorations traditionally taken down? Sixth