New study sees a surge of Brits return to handwriting A new study by Ancestry of 2,000 British adults has revealed some surprising results about the use and popularity of handwriting versus digital writing.

Ancestry’s poll reveals that  handwriting has been in steady decline for the past decade, with 60% of people claiming they write less by hand than they did ten years ago.

The study of 2,000 British adults also found that 49% prefer to write digitally, claiming that it is quicker (69%), more efficient (44%) and it’s how they normally communicate with others (29%). Meanwhile, thanks to the technology revolution, half of Brits (50%) aged 34 and under feel their social media profile is a better indicator of their identity than handwriting.

The popularity of handwriting

Despite this longer-term trend, the research also uncovered a recent resurgence in handwritten documents, with 91% of Brits claiming to have used handwriting more over the past year. Handwritten cards (72%) and shopping lists (71%) are the most popular penned items, followed by to-do lists (69%) and personal memos or messages (66%).

These findings suggest that, despite the rise in digital communication, handwriting may never lose its pertinence, with 64% of us admitting handwritten items such as letters, cards and postcards hold more emotional value and 45% of us wishing we were sent more handwritten letters from loved ones.

Throughout history, handwriting has played a crucial role in recording the lives of our ancestors and offering a glimpse of their identity. In fact, several historical record entries from records on Ancestry® reveal the different ways our forebears used handwriting to make their mark.

To help people discover more about the ancestor behind the pen stroke Ancestry has teamed up with leading handwriting expert (also known as a ‘graphologist’), Tracey Trussell, to share tips on reading and understanding old handwriting in historical records.

This example from the records sees Robert Sargent, who was a dining car attendant on a railway train, fill out the census on behalf of his household.

Tracey comments: “The stylish flair and originality of Robert’s handwriting indicate he was a charismatic and vibrant man.” Tracey elaborates: “The marked right slant of his pen strokes also shows him to be ambitious and enthusiastic. The slant of our handwriting can be as expressive as body language, and Robert’s shows him to be eager to engage.”

This record sees a letter from a student, Gladys Amsley, to her professor in 1953. Tracey comments: “Gladys’ signature matches her script, which would suggest she wants to be perceived as someone who has a consistent nature. She also choses to finish her signature with a full stop, suggesting she stands strong in her words and means business.” 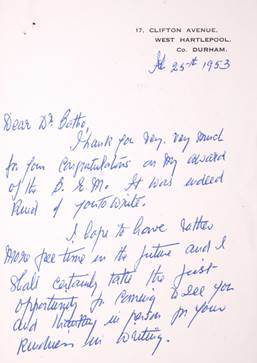 On the findings, Tracey Trussell remarks: “Handwritten documents can tell you so much about a person’s identity. Just as these historical record examples show, there is so much to be uncovered through a simple signature or pen stroke. As the recent resurgence in handwriting within the last 12 months has shown, handwriting holds so much emotional resonance that won’t be diminished by the rise in technology.”