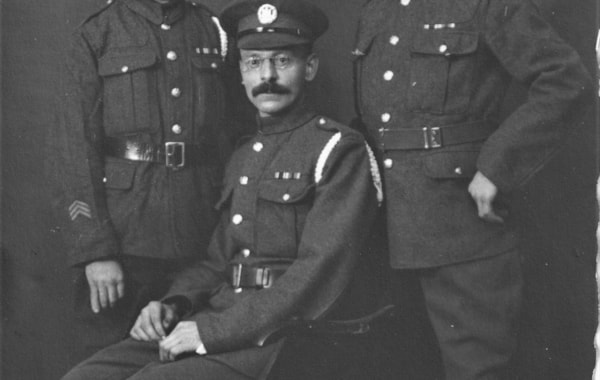 Discover how to unlock the unique ancestors clues in your family photos - the fashions, hairstyles, jewellery, medals, uniforms & more all hold clues that will tell you more about your ancestors' lives, experiences and family story.

These are just a few fascinating photographic clues shared with us by photo-dating and uniform specialists, Jayne Shrimpton, Simon Wills and Graham Bandy, in the video above, or to read below.

Former serviceman Graham Bandy specialises in the uniforms, medals and equipment of the British Army. Here he shares just a few clues. 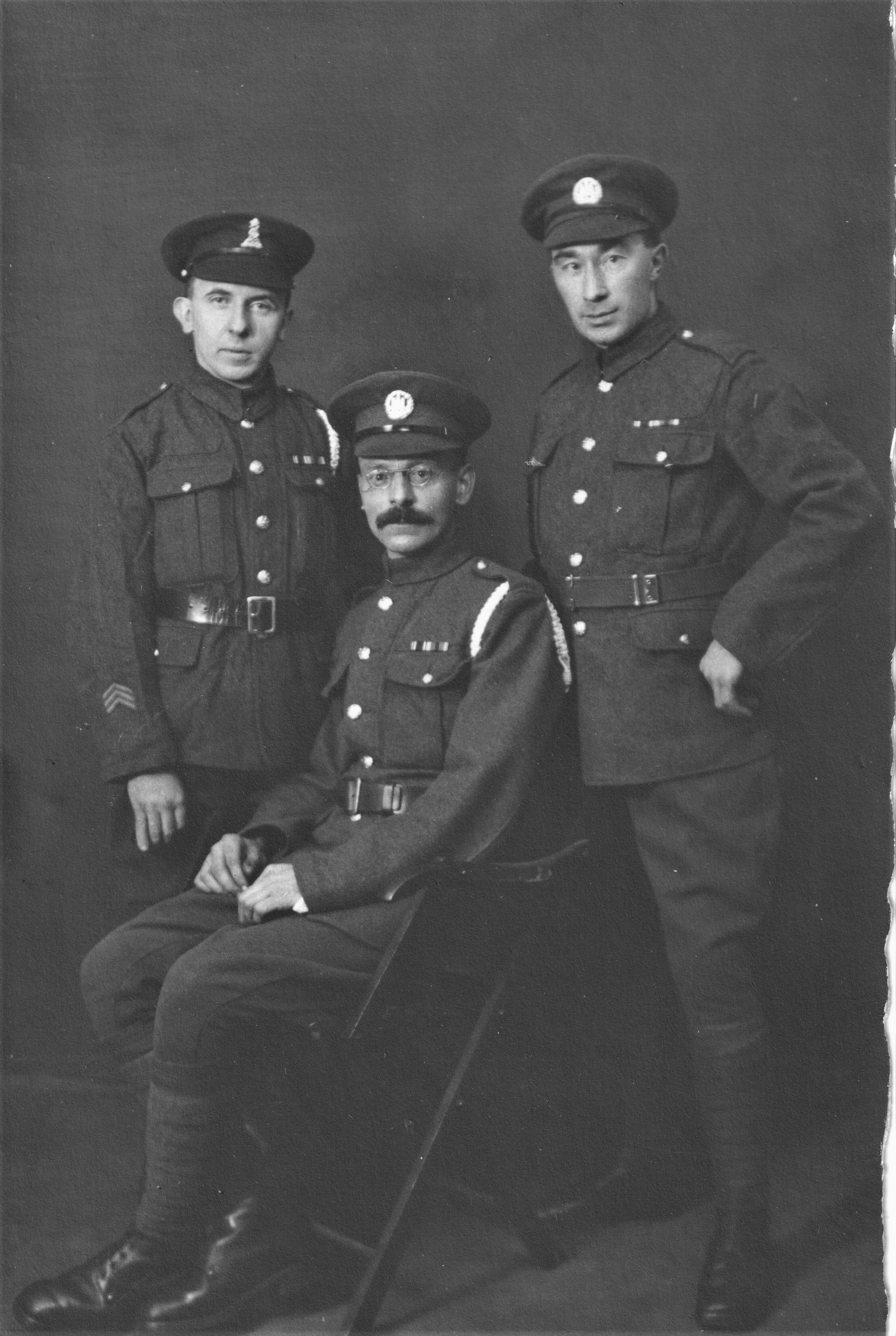 What clues can be spotted?

The man standing on the left has:

This was issued from October 1918, they previously wore the Royal Arms, and were disbanded in 1920. It matches the cap badge of the Royal Pioneer Corps. Soldiers unfit for active military service were re mustered into this corps. In WW2 the Royal Pioneer Corps were fully trained combat soldiers whose main task was doing the labouring required by the Army.

Authorised in Dec 1917 and issued from January 1918. One inverted chevron for each year's service overseas. If overseas in 1914, a further red one was worn at the top.

His belt is a 1903 Pattern Bandolier Equipment belt. Officially superseded by the 1908 Webbing this belt was in constant use in the Army until quite recently. In WW2 the Womens Land Army can be seen wearing them

The man standing on the right served in the Northamptonshire Regt.

This shows a large circle wreath with a castle inside

The fact that the soldiers are wearing medals ribbons shows that the photo must be after war's end. Medals were not issued until 1921.

Belt is the unusual “1917” belt. Some were made by the soldiers from webbing straps others were fully finished issued belts.

The man seated served in the Northamptonshire Regt

The lanyard was worn by the world and his wife. It is NOT to be confused with anything the Royal Artillery wore, Aigillettes, gun firing mechanisms or anything else. It was simply worn as a decoration, usually made by the soldier himself, and would have his issue clasp knife attached and tucked in his pocket. Also wearing a 1903 pattern belt. 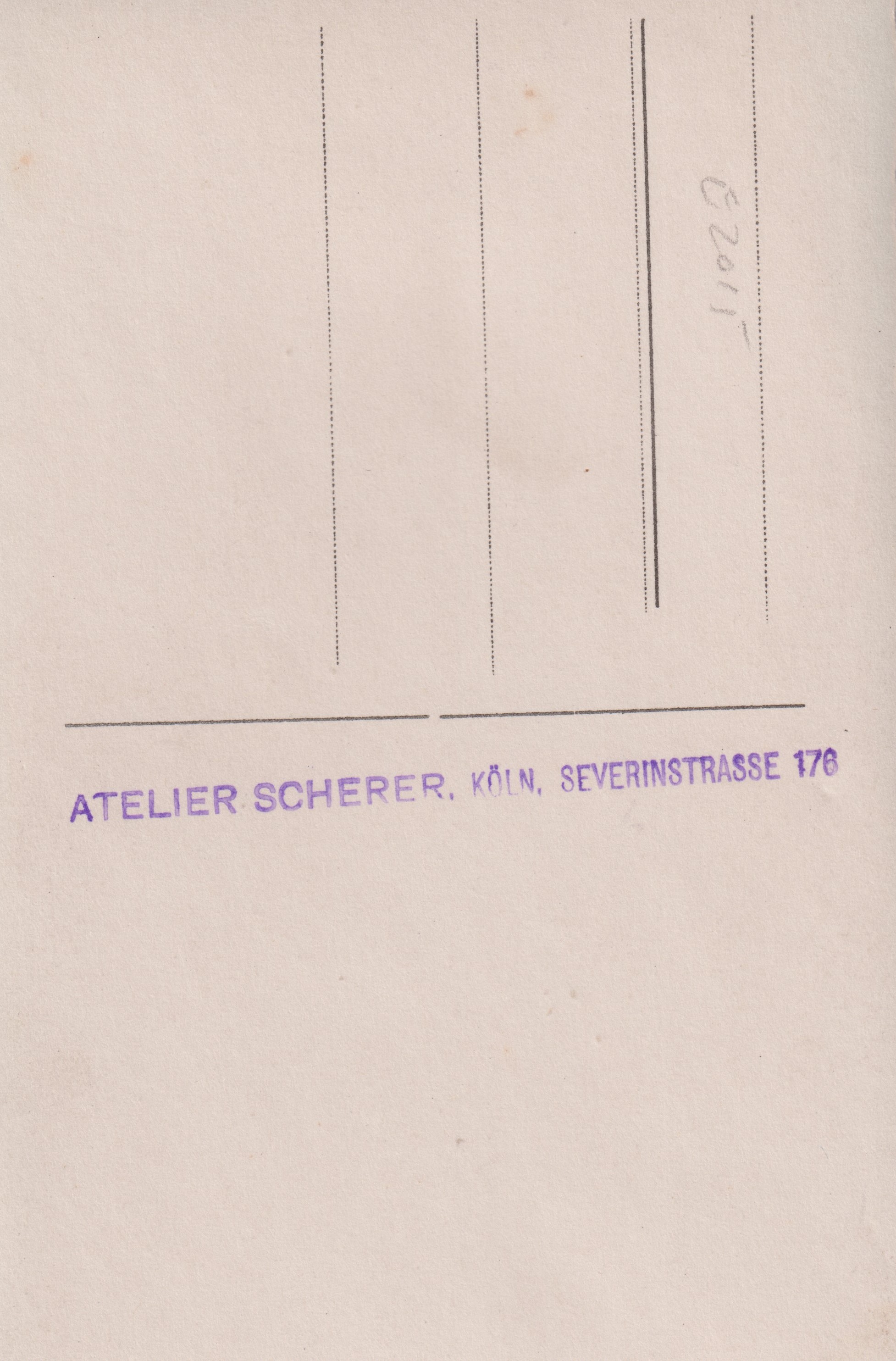 With the above information this picture can be no earlier than October 1918. Knowing the changes to uniforms in 1921, it can be no later than 1921. The picture of the reverse confirms this as it was taken in Cologne, whilst the soldiers were serving with the Army of Occupation in Germany, known as the British Army of the Rhine…A name re used from 1945 until the last British troops left Germany in February 2020, 100 years after this picture was taken. This pic can ONLY be from 1919 to 1920. It is NOT a photograph from the Great War,  but after it. Also note the non British layout of the reverse of the photo…This is a give away on others  that it was not taken at home, but abroad somewhere. Another point to note is the ripple effect edging of the card. Not really seen in this country.

How to interpret maritime uniforms & badges

Dr Simon Wills specialises in maritime history and our ancestors who served at sea. Here he shares just a few clues. 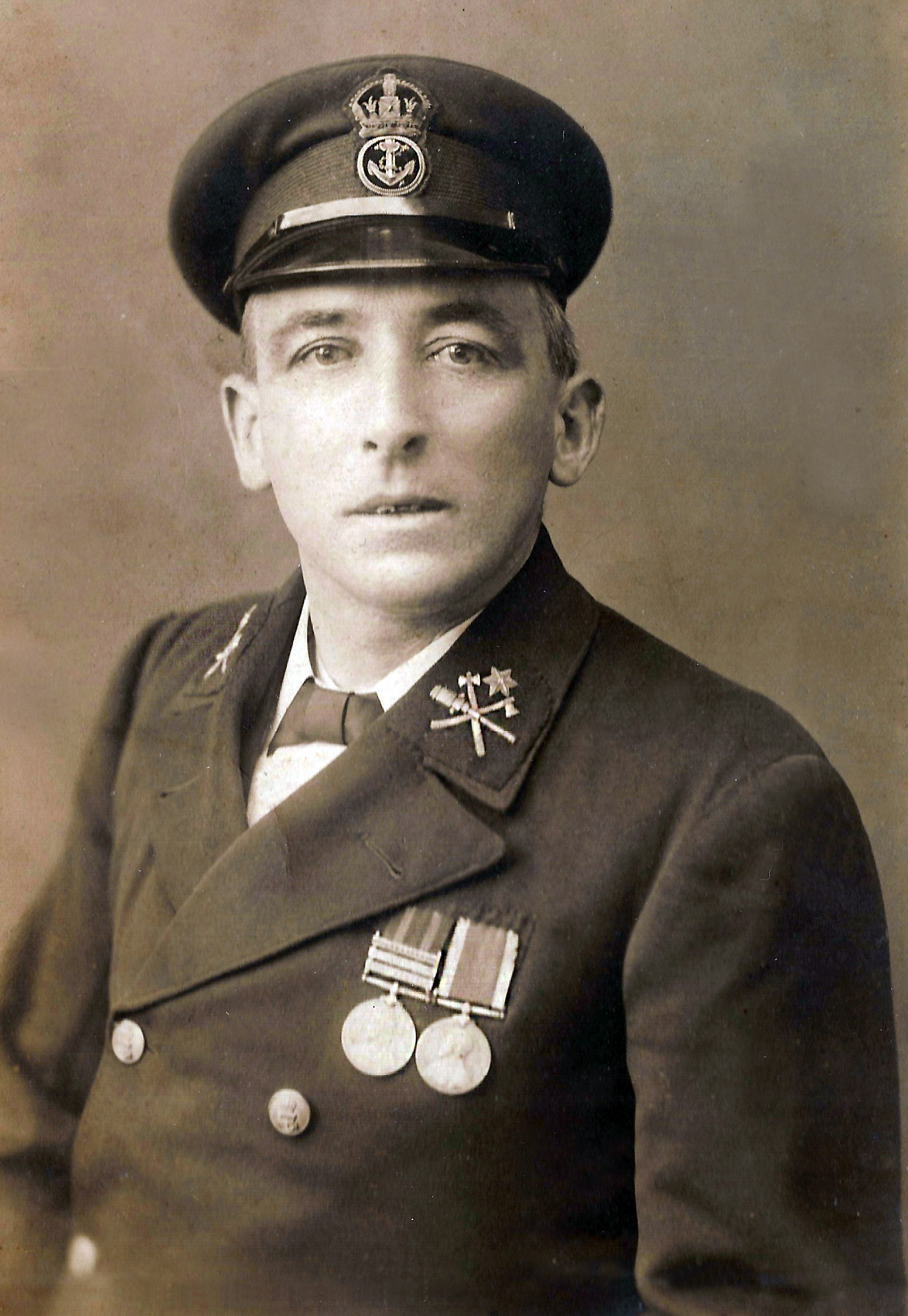 You can tell this man worked for the Royal Navy because his cap has a crown above an anchor. If you look closely, you’ll also see the anchor is ‘fouled’ by a chain running around it which is a symbol particular to the Royal Navy. The crown itself is very square in shape which was the style adopted in the early twentieth century. (By contrast, the crown on Victorian naval uniforms is very squat and flat-looking.)

This man has a badge on each lapel designating him as a chief petty officer, one of the most senior ratings on a ship. These were called ‘branch badges’, because they showed a man’s specialism. More junior ratings wore them on their right arm only. The crossed tools refer to the armoury, so he was a Chief Armourer.

The right-hand medal is the Royal Navy Long Service Good Conduct Medal, rewarding 15 years good service. It has a distinctive blue ribbon with two outer white stripes. The head on the medal is Edward VII, so the earliest he can have joined the Navy is the late 1880s since Edward became king in 1901. The other medal is the Egypt Medal, awarded for campaigns between 1882 and 1889. He fought in three separate campaigns in Egypt because his medal has three horizontal metal strips called clasps.

How to interpret family photos & fashions

Costume & photo-dating expert Jayne Shrimpton specialises in the fashions and photographic formats of the past, back to the start of photography. Here she shares just a few clues. 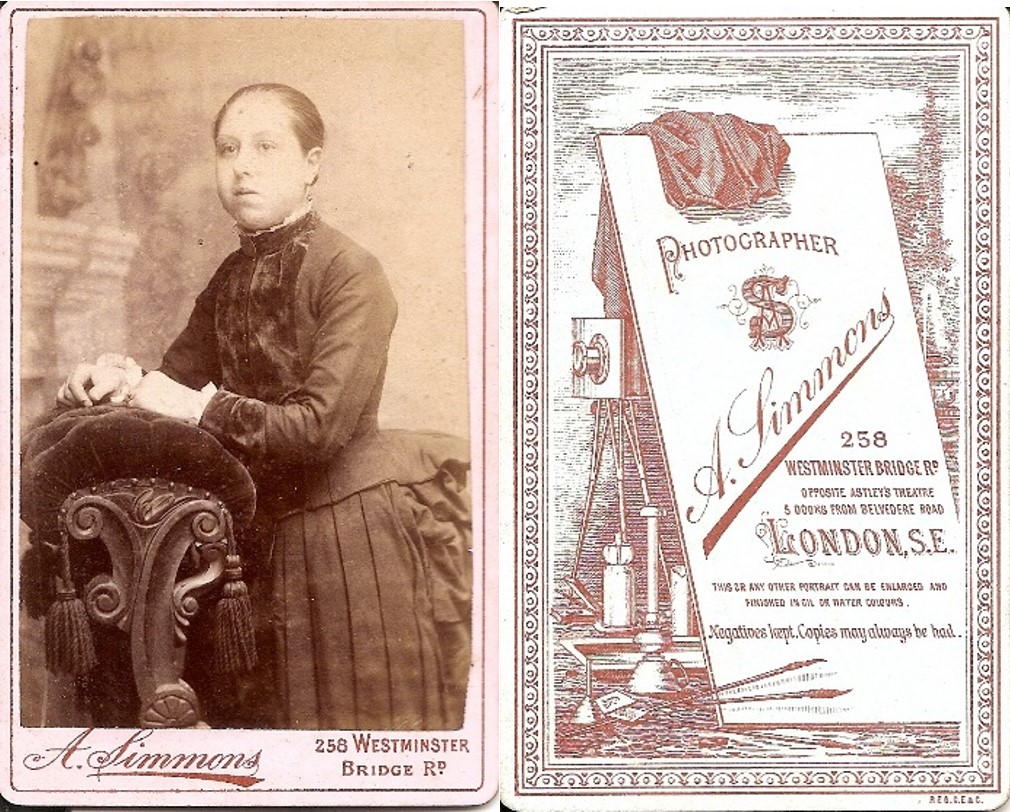 This professional studio photograph is a standard cabinet print/portrait measuring around 16.5 x 11.5cms. First launched in 1866, this card-mounted format was initially unpopular, but became highly fashionable between the 1880s and early-1900s.

The printed design on the card mount, featuring an ornate border framing pictorial imagery including a camera and artist’s easel, narrows the above time frame to between the early-1880s and early-1890s.

The close-up three-quarter composition of the subject is typical of the 1870s and 1880s, the padded and tasselled velvet/carved wood posing stand being most common during the 1880s.

The young lady’s dark costume with high collar, narrow sleeves and contrasting velvet or plush (cotton velvet) panels features a protruding bustle, fashionable c.1884-1890. Its projection was especially deep or pronounced, as seen here, between 1886 and 1888.

What was the occasion?

We can even add more to the close c.1886-1888 date range. The subject is consciously displaying a ring on the third finger of her left hand. This was her engagement photograph.

To dive deep and improve your knowledge of old photos, join us on the Photo-Dating Bootcamp, starting Wed 24 March 2021. Tickets start from £10, up to £25 to attend the full bootcamp. For further details, please click here.