Griffith's Valuation is an invaluable resource which family historians tracing Irish ancestors can use in the absence of surviving census returns, as Claire Santry explains.

Griffith's Valuation is an invaluable resource which family historians tracing Irish ancestors can use in the absence of surviving census returns, as Claire Santry explains.

In the absence of surviving census returns for the mid-19th century, Griffith's Valuation (published 1847-1864) is used by genealogists to place ancestors in a certain place at a certain time. It was designed for tax collection and lists the people responsible for paying tax on each parcel of land across the island, and on each property from the labourer's humble mud-walled cabin to the stone-built pile of the well-to-do.

At first glance it's a pretty unsexy ledger of names, land acreage and monetary value, but further exploration can provide considerable detail about how your ancestor lived and his status within the community.

In some instances, it may also provides direct genealogical information or clues, or simply additional information about occupation or physical characteristics. As unlikely as it may seem, the family historian researching a locally common surname is more likely to benefit in this way.

Section 31 of the Instructions manual issued to the surveyors who carried out the Valuation stated that when "two or more persons in a townland have the same Christian name and surname, it will be necessary to obtain an agnomen (as Farmer)". An agnomen is a word meaning 'an additional name', and the surveyors interpreted this vague instruction in many different ways.

The most frequently used agnomens relate to the relationship between father and son. Sometimes these will appear as Senior and Junior (usually abbreviated to sen. and jun.), or, rather more rarely, Old and Young, but even better are the instances when the surveyor includes the names of the householders' fathers. See the image for examples of each of these agnomen being used. 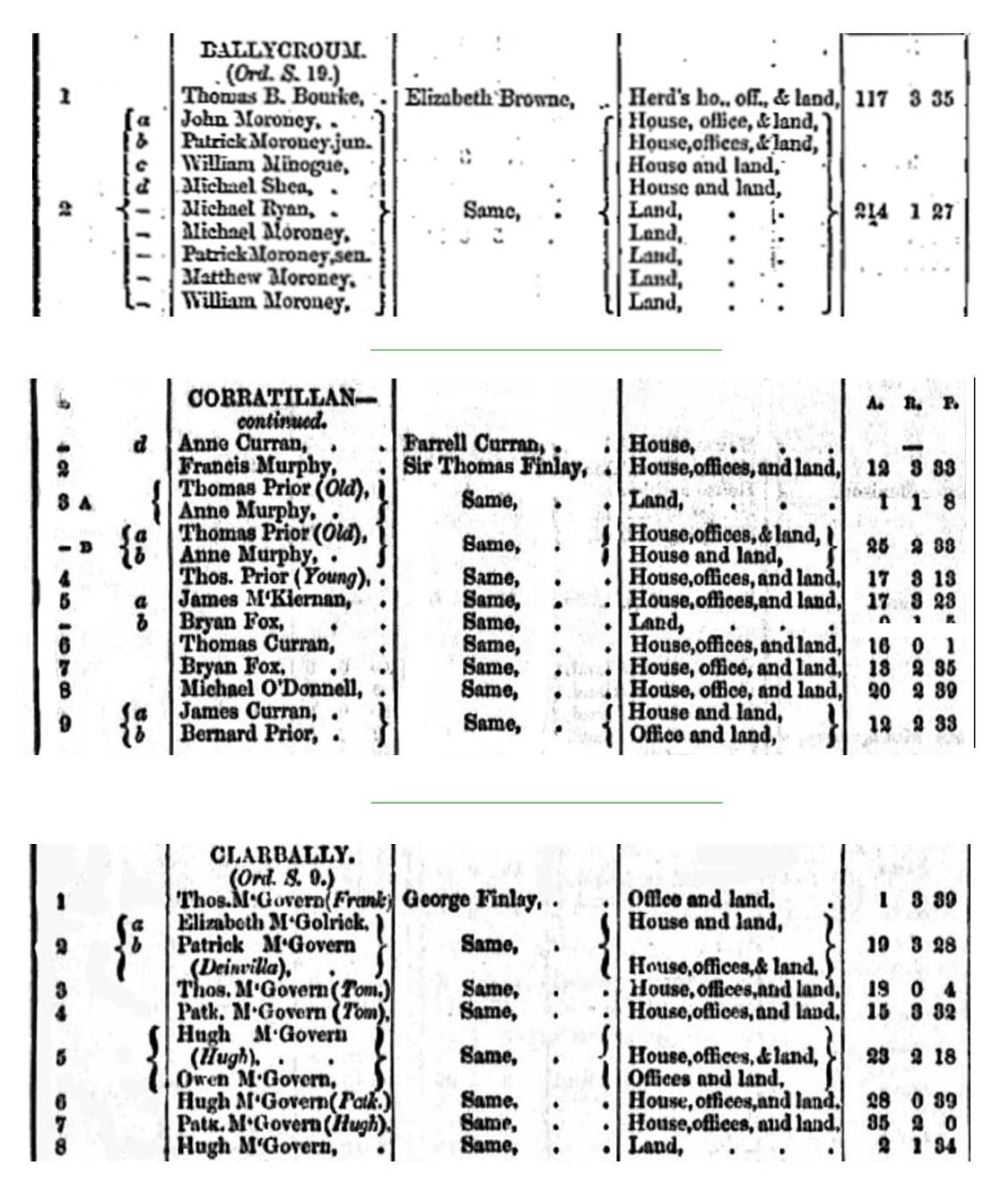 In the townland of Ballycroum in Feakle, Co Clare, we find six of the ten tax payers share the surname Moroney, and two of them are called Patrick Moroney. Thanks to the inclusion of the Senior and Junior agnomens, we can be pretty certain that one is the son of the other.

The third example, from Clarbally (also in Templeport, Co Cavan), sees the name of the father of the taxpayer being noted. In this case there are eight McGoverns in the townland; the father's name is given for six of them.

While it isn't possible to precisely work out the relationship between all of them, this level of proximity would usually suggest close kinship, and it is likely the five named fathers were brothers.

Other agnomens used by the surveyors relate to the occupation of the taxpayer, physical characteristics,  topography or location of residence:

a. Occupation of the taxpayer – doctor, pawnbroker, weaver etc

c. Residence outside the townland being examined. In the example of Clarbally,  Patrick McGovern at Lot 2b is identified by Deinvilla – the ancient name of the adjacent townland of Derryvella (see map); the entry for Derryvella is a few pages on from Clarbally's in the Valuation volume, and sure enough, this is where we find Patrick's residence. He is not, therefore, the same Patrick McGovern identified as being the son of Hugh.

For more about the use of agnomens by the Griffith's Valuation surveyors, see James R Reilly's Richard Griffith and His Valuations of Ireland, published by Clearfield, 2000.

Claire Santry manages the Irish-Genealogy-Toolkit.com and the IrishGenealogyNews.com blog. She is also the author of The Family Tree Irish Genealogy Guide  – Tracing your Ancestors in Ireland, which is due for publication in May/June.