Ghosts of a Colonial past 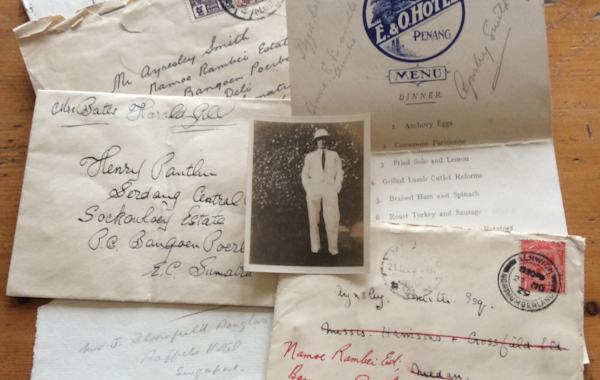 From dates on envelopes and names mentioned in letters, never let even the smallest clue pass you by - it could unlock another door back into your family's story

Being a general ‘nosey parker’ comes with the territory of family history research – with digging about for clues in what some people would consider rubbish a prerequisite. I often take it one step further by seeing how much information can be unearthed from these clues no matter how small or dull they may appear. The findings are then compiled into a narrative which act both as an ‘aide memoir’ to myself and are more digestible and easier to follow for a ‘non-genie’ audience.

This particular case study has been chosen for a number of reasons. The first being I was lucky enough to know my grandfather well – at least I thought I did!  However, as he was born in 1908 and myself in 1967 he lives in mind's eye as an older person. I knew very little about him as a young man other than at some point he had spent time on a rubber plantation in Sumatra. The second, is there is no more challenging name to research than John Smith, and although he was known as Aynsley his first name for official purposes was John. The third, it was a very meagre set of items that revealed a snapshot of his younger self.

Treasures in the outhouse

This is a summary of the contents that I had to shed light on his earlier life:

Mementoes of times past

These items were the sole contents of an old writing box that used to live on the mantelpiece in my grandparents' bedroom. After they both died it was relegated along with a lot of other ‘junk’ to my parent’s outhouse. This small collection contained an essence of being, a type of latent energy of memory that lingers on in places, objects, pictures, letters clothes etc, long after the owner has passed on. They marked the beginning of a journey around the world set to an economic backdrop of the Wall Street Crash of 1929, the political rise of Nazi party and the beginning of the end of British Colonialism.  Just how far I managed to get, and how much I managed to discover not only about my own relative, but his travelling companions and the names on the scrap of paper can be read in an old blog post from May 2015. It just goes to show that with a bit of lateral thinking and imaginative research, you don’t have to be a writer to tell a good story! Furthermore, as you will see from the comments at the end, the post also reached family members of grandfather’s travelling companions and others mentioned in the correspondence and helped them re-engage with their own family history too.

To enjoy an extended read, packed with beautiful images, this link will take you to the full blog post on Susie Douglas's website https://www.bordersancestry.com/blog/ghosts-of-a-colonial-past

To read more about about how memorabilia can unlock those precious clues to the past, to discover how to tackle old documents and handwriting, and to help you find family history clues close to your heart and close to home, check out the Crack the Code stand (stand 147) at Family Tree Live, 26-27 April 2019.

See also page 10 of the May issue of Family Tree magazine, where we'll be giving you a sneak peek of some of the things you can look forward to at the Crack the Code stand.