Unusual occupations of the last 150 years As many of us prepare to return to the workplace, Ancestry has revealed some of the most unusual occupations of years gone by - some of which are now obsolete.

Ancestry has delved into the historic records to highlight some of the quirkier or niche professions from the past 150 years – from sin-eaters and hop stringers to knocker-uppers and walking stick benders.

For example, the role of Knocker-Uppers, otherwise known as ‘human alarm clocks’, was to wake people up so the occupants inside could get to work on time. Early bird William Crompton from Bolton (pictured in 1939, aged 72), was one of the eldest recorded knocker-uppers and would rise at 3.45am to wake factory workers every morning, for a fee of up to sixpence – although “[S]trangely enough, Mr. Crompton is himself awakened by an alarm clock”. 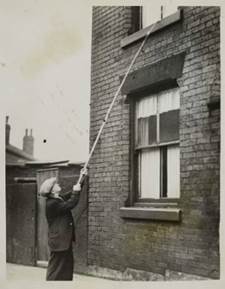 In the 19th century, your ancestor could have had the ominous role of a sin-eater, hired to stand over the deceased and take his or her sins as their own. The last sin eater was said to be Richard Munslowfrom Shropshire, who died in 1906.

Hop stringer: Until technology advanced in the 1900s, it used to be the job of men on stilts to prepare the lines of poles in fields, to allow hop vines to grow. Hop stringers included Henry Willis, who had held the role for 41 years (when pictured in 1942). 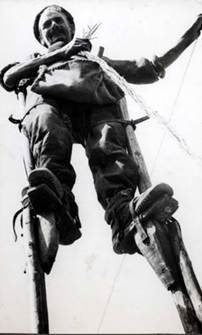 Walking Stick Bender: Before the aid of machines, there were human walking stick benders. One of these included William Close from Reading, whose occupation is referenced as such in the 1911 Census. Meanwhile, in Harrow, Middlesex, the same profession ran in the family with both Joseph Ergis and his son, George Ergis listed as walking stick makers and benders.

Clock winder: A clock winder did exactly that — wind clocks. Before electric clock winders and technology came into play, people including Edith Hall from Oldham, Lancashire would be responsible for keeping time manually

Whalebone cutter: Thanks to its lightness, strength, elasticity and flexibility, whalebone (which isn’t actual bone but baleen used to filter food) was once used in making corsets, brushes, buggy whips and umbrellas. In the 1939 Register, there were 42 Whalebone Cutters recorded from Essex, Middlesex and London including Alexander Bowen from Barking, Essex.

Lamplighter: A profession associated with the late 1800s and early 1900s, their role was to light the town’s street lamps including William Clunie from Leith, Scotland.

Almond Sorter: This job, which involved removing any foreign bodies or impure kernels from almond stock in factories, was predominantly undertaken by women as seen in the 1939 Register including Grace Brodt from West Ham, Essex and 67 year old Ellen Furze from Hackney, London.

Simon Pearce, Family History expert at Ancestry said: “With the impact of technological developments and cultural changes over the past couple of centuries, many of the roles our ancestors may have held are no longer in existence. But these jobs – and the lives of our family members who did them – can come to life when you look through historic records and photos.

"Through them, you can piece together who your ancestors were and the lives they led. Historic occupation records often contain a lot of information - including when and where they were appointed to that role, any qualifications they held and, in some cases, disciplinary action against them.’’

Discover more about your ancestors' occupations at Ancestry.