Who do you think dunnit? Family history in crime fiction A sample of great uncle's letter

To a “genealogylit” author like myself, the connection is obvious. As any family historian will concur, researching your ancestors is rather like a detective following a trail of evidence, even if what’s uncovered isn’t a crime – though there’ll be many of you who, like me, have discovered some badly behaved relatives along the way!

For me, the intrigue of digging around in archives to unearth long buried secrets reflects the appeal of genealogy mysteries. The tagline of my first Esme Quentin mystery, Blood-Tied, says it all – “A desperate crime, hidden for 60 years. But time has a way of revealing the truth.”

From genealogy to mystery writing

So how does a mystery writer use genealogy techniques to solve a fictional mystery? The short answer is, in exactly the same way as a family historian uncovers secrets about their ancestors. The only difference for a mystery writer is that what we uncover is the inspiration behind the story, and how we do it becomes the framework of the plot.

I got drawn into family history after the exciting discovery of a fragile Australian death certificate, dated 1868, in a box in the attic. No one was aware that anyone in the family had travelled to Australia, let alone in the 19th century. So who was this person? Why did he go and what happened to his wife and children after he died?

As I set out on a long and very steep learning curve to find out the answers, I realised how little we know about our ancestors which set the writing side of my brain ticking. By the end of the trail, not only had I got to grips with a variety of genealogy techniques, but I’d come up with the idea for Blood-Tied and created my protagonist, historical researcher, Esme Quentin. In the book, Esme uses her knowledge to uncover the secret past of her sister Elizabeth, convinced it will provide answers to why Elizabeth was attacked and left unconscious.

Sometimes research into an ancestor’s plight provides fodder for a mystery author’s brain. I’d been reading about convict transportation to Australia having discovered that an ancestor of my husband was convicted of theft of a sack of barley in 1831 and transported to Van Diemen’s Land.

The horrors transported convicts endured before, during and after their journey gripped me and inspired the plot of The Indelible Stain – the title of the book being a reference when the shame of having convict ancestry was considered a “stain” on a family’s reputation.

Secrets I’ve uncovered during my own family history research often find their way into a plot. After stumbling upon the revealing will of a family member, where he’d left all his estate to a lady who most definitely wasn’t his wife, I was intrigued. But while I did uncover the story, after some judicious digging, I created a completely different version which went into the plot of the third Esme story, The Malice of Angels.

Letters are always a joy to a family historian – I have a lovely one which a great uncle of mine wrote to my aunt when she boldly asked about her never-talked-about grandfather. I remember poring over it with excitement, hoping to finally find out the truth about this family black sheep. But while my great uncle acknowledged that his father’s family had loved parties and the high life, and his father was “the playboy of them all”, he wouldn’t say any more, announcing that he intended to “draw a line” at that point.

When I discovered the truth while analysing the census returns of 1881, I could understand why the family were so keen to keep their secret – it seems my great-grandfather had managed to live a double life for several years before being discovered and, presumably, kicked out of the house. He and his “alternative” wife and children quitted the UK and settled in Australia. Despite my great uncle’s letter being so coy, the idea that a letter might expose a devastating truth stayed with me and I used it in the Esme Quentin “short reads” novella, Death of a Cuckoo. 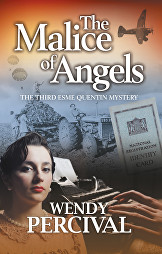 There will always be a rich source from which to draw more plot ideas and stories. The discoveries that Family Tree magazine readers themselves uncover and which appear every month is a resource in itself. But with access to newspaper archives, quarter sessions and courts records, wills, photographs and diaries becoming available all the time, there’ll never be a shortage of inspiration for plotting a genealogical mystery!

Author and family historian Wendy Percival is the author of the Esme Quentin Mysteries and her latest book, The Malice of Angels, is out now. Visit Wendy's website to find out more about her work.