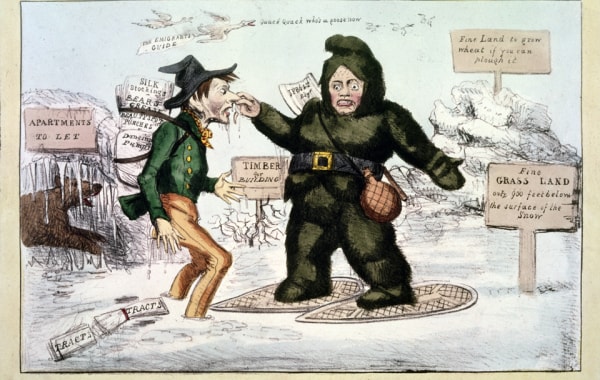 'Welcome to Canada' cartoon dating from 1844

In this blog Christine Jackson gives a flavour of her wider interest in family history research, namely the lives of the British home children who emigrated to Canada, and the work of the British Isles Family History Society of Greater Ottawa (BIFHSGO) to create databases to help people to trace their home children family members.

British home children – a different side to the story? Images

Whether it’s for her own family history research, or helping others to learn about their ancestors’ stories, Christine Jackson knows the importance of good research aids and a thorough understanding of the past. At Family Tree Live she shared her own research into the life of her great-great-uncle. Rising from humble beginnings in a family of agricultural labourers, he went on to become a significant servant in the household of Queen Victoria.

In this blog Christine Jackson gives a flavour of her wider interest in family history research, namely the lives of the British home children who emigrated to Canada, and the work of the British Isles Family History Society of Greater Ottawa (BIFHSGO) to create databases to help people to trace their home children family members. Their work as regards the home children has largely concentrated on the role of the Middlemore agency, and Christine hopes to redress the balance as to how the treatment of home children, particularly by this agency, is viewed.

I joined this thriving 500+ member society in 2002, now in its 25th anniversary year. Its aim is to encourage family history research and its dissemination, by people with ancestry throughout the British Isles. Based in Ottawa, Canada, our monthly meetings regularly attract an audience of up to 180 and our annual conferences draw about 250 registrants. Thirty percent of our membership is based outside of Ottawa.

While working in collaboration with Library and Archives Canada (also located in Ottawa), BIFHSGO has developed a particular expertise researching and indexing young people who were brought from Britain to Canada during the juvenile emigration movement of the late 19th and early 20th centuries. Over 100,000 neglected or homeless and often unwanted children from Britain were settled in Canada between 1869 and 1948 by more than 50 British juvenile emigration agencies. These young people are known in Canada as “British home children” (and elsewhere as British assisted juvenile emigrants) because they came from an agency's home in Britain to be settled from the agency's distributing home in Canada. BIFHSGO has placed a special emphasis on the more than 5,000 young people who passed through the Birmingham-based Middlemore agency (otherwise called the Children's Emigration Homes). These agencies operated without the financial backing of the British government, which, until 1922, concerned itself solely with children sent abroad from union workhouses by approved emigration agencies, of which Middlemore’s was one.

BIFHSGO is pleased to offer considerable resources and advice to people having ‘British home child’ ancestors who settled in Canada. The society has produced a number of databases that can help people who are researching the backgrounds and experiences of their ancestors; these are listed below.

At the same time, using the experience of the Middlemore agency as an example, BIFHSGO is keen to present a more balanced view of the juvenile emigration movement than has often been the case to date and to dispel the idea that British home children who were not orphans were – erroneously – snatched from the bosoms of loving British families and sent to the colonies as cheap labour. Much unfounded and misinformed negative criticism of the movement has been expressed on both sides of the Atlantic, both about how and why children were selected for emigration, and how they were treated by the emigration agencies and the recommended families into whose homes they were settled. In Canada, federal inspection policies and the provincial labour, education and adoption laws also applied. In Australia (1912–1954) and in the Prince of Wales Fairbridge Farm School in British Columbia (in operation 1935–1948), the children lived at farm schools until they had completed their education and were ready to go out into the world on their own. Even by the standards of the times, in Canada such long-term institutional care was considered to be much less desirable than placing children and young people with recommended families who were willing to accept them and to sign the settlement and/or work agreements.

About the Middlemore agency

A BIFHSGO member and home children researcher, Patricia Roberts-Pichette, Ph.D., has recently published a wonderfully researched and comprehensive book on the work of the Middlemore agency. Some emigration agencies have been accused of having acted more in their own interest than the children’s, leaving the latter open to abuse. And a common belief has evolved that these children were exploited for economic gain by the Canadian families with whom they were placed and for the relief of the British public purse. However, after extensive in-depth research, Dr. Roberts-Pichette has concluded that the experience of the Middlemore agency was strikingly different from some other emigration agencies. She found that John T. Middlemore’s motivations in emigrating children from Birmingham to Canada were truly altruistic and that his organisation’s procedures were in accord with the best contemporary social practice. In fact Mr. Middlemore was probably well ahead of his time in his ideas about the treatment of children, especially about avoiding the effects of lack of love and institutionalization.

Contemporary newspaper reports leave no doubt that a few British home children in Canada were physically and in other ways badly abused by family members with whom they were placed, and that the latter had to be taken to court over the treatment they inflicted. Mr. Middlemore’s organisation found it necessary to take such action in a few cases. But statistics and documentation to support a popular argument that the majority or even a significant proportion of home children were abused by the families with whom they were settled just do not exist. Anecdotal evidence is too often taken and generalised as applying to the majority. Dr. Roberts-Pichette’s analysis of the Middlemore agency’s working documents makes it clear that the Middlemore children were regularly monitored in their homes, that their experiences there were mainly positive, and that most of them thrived.

Her book explores government policy changes over the whole period of juvenile immigration and reveals the influence of eugenicists in helping end the juvenile immigration movement in Canada. It is essential reading for anyone wanting to understand the movement's causes and evolution. ‘Only in a very few instances did the delegation come across evidence of unhappiness due possibly to the child proving unadaptable to its surroundings. Almost invariably the children stated they were thoroughly happy in Canada, and would on no account return to the Old Country’. (‘Children of Britain in Dominion have fortunate lot’, Toronto Globe, December 13, 1924.)

‘Whatever horror stories came out of the home children movement, they were not about the Middlemore children’ - the Canadian Immigration Historical Society (September 2017).

Since her book was published, Patricia has worked to expand the existing Middlemore Index on the BIFHSGO website to include, for each child, details of all the source documents found in the files of the Middlemore archives in which the child is referenced, including how researchers may access them. (None of the Middlemore source files are online.)

Following is a listing of the resources that BIFHSGO has developed to assist families worldwide who are researching specific ancestors known to have been home children; links are provided to comprehensive information, all of which is on the BIFHSGO website (https://bifhsgo.ca):

British Home Children: Their Stories Book published in 2010 to celebrate The Year of the Home Child in Canada

BIFHSGO welcomes enquiries from home child researchers. While it cannot undertake actual research projects, it is pleased to provide advice and guidance regarding source document references for Middlemore and some other British home children. Contact queries@bifhsgo.ca

If you are a British home child, or know of a family member who was, Family Tree would be very keen to hear from you about your experiences too. Please email helen.t@family-tree.co.uk with details