A well-earned rest for our ancestors beside the seaside History of the seaside

Enjoying some down time is nothing new, as Rachel Bellerby discovers, in this exploration of our ancestors and the seaside. Enjoying some down time is nothing new, as Rachel Bellerby discovers, in this exploration of our ancestors and the seaside.

A recent trip to the seaside (Filey to be exact…) prompted me to think about the seaside and what it would have meant to our ancestors. Of course, before the Georgian era, our coastal towns weren’t known as places of leisure, but simply places where people lived and worked.

Then came the craze for spas, water cures and healthy living and seaside resorts began to develop. Scarborough, just up the east coast from Filey, was one of the country’s earliest seasides and soon began to develop with shops, stalls and hotels springing up to meet the growing demand from visitors. Further south, resorts such as Herne Bay, Brighton (with its earlier spa heritage) and Whitstable developed, with hotels, boarding houses and souvenir shops and stalls providing the locals with the opportunity to making money by catering for the growing number of visitors.

The coming of the railways in the nineteenth century changed people’s outlook on leisure and excursions, meaning that for the first time, our ancestors could travel to places which would have been difficult to reach by horse and carriage – this was the golden age of the British seaside. Many of our forebears would have enjoyed a trip to the coast by train, snatching precious days off work (which often had to be taken without pay) to enjoy a paddle in the sea, an ice-cream and a walk along the cliffs. Perhaps they even visited one of the photographic studios set up in many resorts, which specialised in capturing happy family portraits. 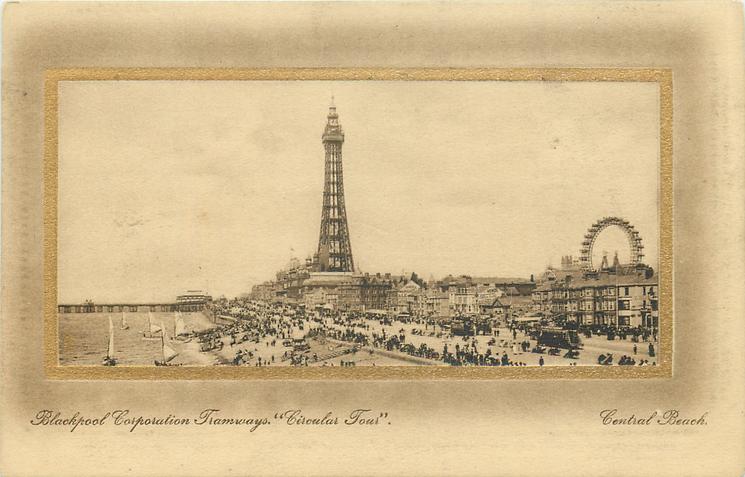 The town of Blackpool in Lancashire served both the mill towns of Lancashire and Yorkshire, with trains arriving several times a day from towns and cities such as Manchester, Bradford, Blackburn and Leeds. Blackpool Tower, opened in 1894, featured on thousands of postcards and has formed the backdrop to generations of holiday snaps.

Of course, there are many thousands of other people for whom the seaside was a place of work. Think of the fisher folk, both men and women, who caught fish, processed the catch and sold it on, or transported it inland to the huge markets of cities such as London, Manchester and Glasgow.

The herring girls are particularly memorable, working along Scotland’s east coast to land herrings, then packing them up into barrels. These women would follow the herring shoals far down to England’s south coast, earning their living as they went.

If you’d like a reminder of the golden age of the seaside, there are some lovely Victorian and Edwardian postcards available from online retailers including Ebay and specialists such as Old Postcards for Sale. Or take a trip to the Seaside Museum in Herne Bay, or the Brighton Museum & Art Gallery.