On discovering a newspaper article that described a battlefield tour that had taken place in 1926, Mary Chandler just knew she had to find out more about her grandfather's time in the First World War.

Mary Chandler was recently delving into the cupboard where she keeps her photographs. She had just found some old family photos that she thought she had lost when a piece of paper fell out that certainly aroused her curiosity...

It was something I'd not remembered seeing before, a reprint of a newspaper article from 1926 describing a battlefields tour organised by the First Surrey Rifles Old Comrades Association, of which my grandfather was a member. So far I had drawn a blank in looking for his war records, but I decided it was now time to have another try, and I looked to see what else I had in the cupboard.

My grandfather, Cyril Hydur Blake, was born in 1882, and so when war was declared in 1914 he was 32 years of age. My mother told me that it was a huge disappointment to him that he was not allowed to fight in France. He was very short-sighted and he was told that his eyesight was too poor. 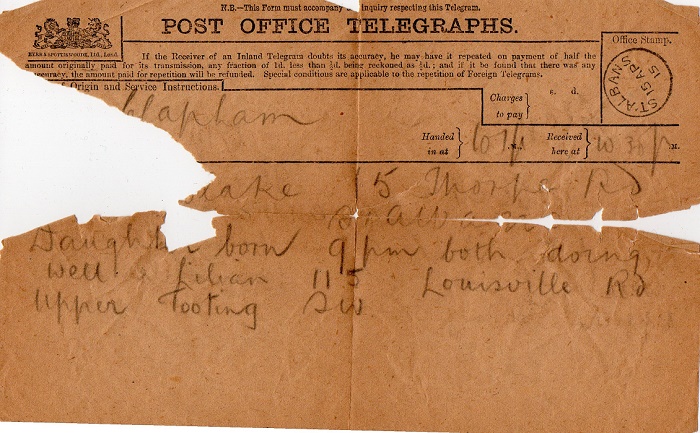 My mother died in 2013, three days before her 98th birthday. She was born on 15 April 1915 and when she died I found the fragments of the telegram sent to my grandfather by his sister telling him of my mother's safe arrival. The family lived in Tooting in South London, but the telegram was sent to my grandfather at St Albans, and I realised that although he never went to France, he had still served away from home during the war. In April 1915, when my mother was born, the country was facing the grim realisation that the war, which they had once been sure 'would be over by Christmas', was going to last for much longer.

My grandfather was a black and white artist, illustrating children's comics and annuals. To my sister and I, he was a gentle person, a benign figure. It therefore seemed in strange contrast that the Army was the great love of his life. Their hallway was lined with regimental photos.

He had joined the Volunteers as a young man and in the cupboard I found photos of the First Surrey Rifles summer training camps for most years from 1903 to 1912 and other undated ones, some possibly earlier. The First Surrey Rifles were a Volunteer Force that had been founded in 1859 and was based at Camberwell in South London near his home. They had sent volunteer detachments to join the regular forces in the Boer War of 1899-1902 and there was great enthusiasm for volunteering at that time.

In 1908 the Volunteer Forces became the Territorial Force and the First Surrey Rifles became incorporated into the London Regiment, although still keeping its identity. In August 1914 the battalion had just arrived at Perham Down on Salisbury Plain for their annual camp, when war was declared. They immediately returned to their headquarters at Camberwell and when they had recruited enough men to bring them up to full strength, (it only took four days) they marched to St Albans where they were to undergo intensive training. St Albans had become a garrison town, with over 7,000 soldiers billeted there. The battalion left for France in March 1915, disembarking at Le Havre on 16th. It must have been very hard for my grandfather to watch them go, and he must have still been smarting from the disappointment when my mother was born a month later. 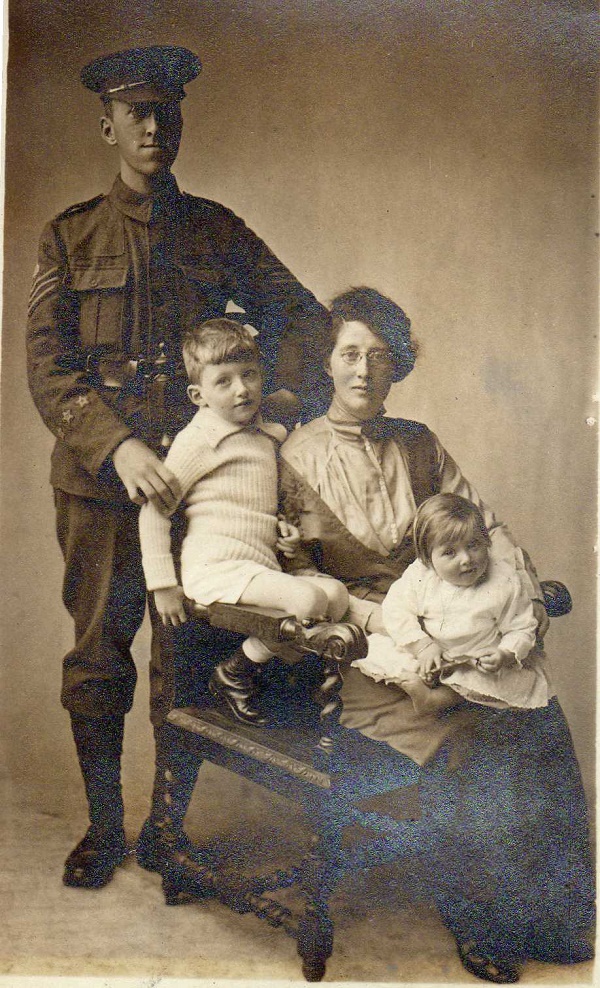 The question remained - what did he do in the war?

I Googled 'First Surrey Rifles' and discovered that in First Surrey Rifles section of the Wikipedia website there is an Imperial War Museum photograph showing a group of recruits being taught to box as part of their training.  It was taken in Camberwell in 1914 and the soldier overseeing them, although not named, is undoubtedly my grandfather.

From this point, the internet provided me with a huge amount of information, and I was able to piece together the places where my grandfather had served. When the battalion left for St Albans, a few officers were left behind in Camberwell to recruit a second battalion and it seems my grandfather was one of them. They had enough men by the end of September. There were no uniforms for them to begin with and the men continued to live at home. They trained at Ruskin Park and on Wimbledon Common. I remembered hearing that my grandfather had been accidentally shot in the leg on Wimbledon Common during a training exercise.

In January 1915 they moved to Redhill, where they were billeted and continued their training, which included digging trenches at Merstham Hill, part of the London Southern Defence Scheme. By March they had been sent to St Albans in time for my grandfather to say goodbye to his old comrades in the first battalion before they sailed for France.

In St Albans, he was also to part with the second battalion, which he had helped recruit and train. They continued to train in various places until they went to France in June the following year. A month before that, on 8 May 1916, their C company Quartermaster Sergeant had sent my grandfather a photo of the company taken at Sutton Veny on Salisbury Plain, where they had gone for their final training. They only served in France for a few months before being sent to the Macedonian Front and then, in July 1917, on to Palestine where they fought in General Allenby's campaign.

They suffered catastrophic losses in an attack on Amman in March and April 1918. On one occasion they were so exhausted that when they stopped on their way to a raid for a ten-minute break, the whole battalion fell asleep for an hour and the attack was abandoned. On 3 June 1918,  with no reinforcements forthcoming and most of their officers lost, the battalion was disbanded and the remaining men drafted into other battalions.

Back in March 1915, while the second battalion was still at St Albans, a reorganisation had taken place. Some of those who had only signed up for Home Service went back to Camberwell to raise a third battalion who would remain in England as a reserve unit. The remainder, including my grandfather, were sent to Clacton on the Essex coast. This was in May or June, which was why he was at St Albans in April when my mother was born.

I wonder if he was allowed leave to go and see her.  He was transferred to the 108th Provisional Battalion. These battalions were formed with a dual purpose, the defence of the East Anglian Coast and the training of new recruits, or, as it was described, 'the physical conditioning to render men fit for drafting overseas'. It had been discovered how poor the state of the nation's health was and many men were just not fit to fight. In January 1917 the 108th were at Frinton, not far from Clacton. When I discovered this, it stirred a faint memory of my mother saying that her father had been in Frinton during the war, and her cousin has since confirmed this. Then in May of that year, due to another reorganisation, they became the 32nd London Battalion and moved to Walton-on-the-Naze, just along the coast. The battalion was disbanded in April 1918, but my grandfather was probably not demobilised until early 1919.  I am sure my grandmother was glad to see him back home.

I found about 70 photos that my grandfather had kept from his time as a soldier.  They were all on postcards except for one, which was much larger and mounted in a frame.  This photo shows five soldiers, one of whom is my grandfather, with their names and ranks and regiments written beneath. It seems my grandfather was a Company Quartermaster Sergeant and it says he was with the 32nd London, so this photo must have been taken in 1917 when they were at Walton. The heading says 'Staff 1st & 2nd course May 26th - June 10th'. 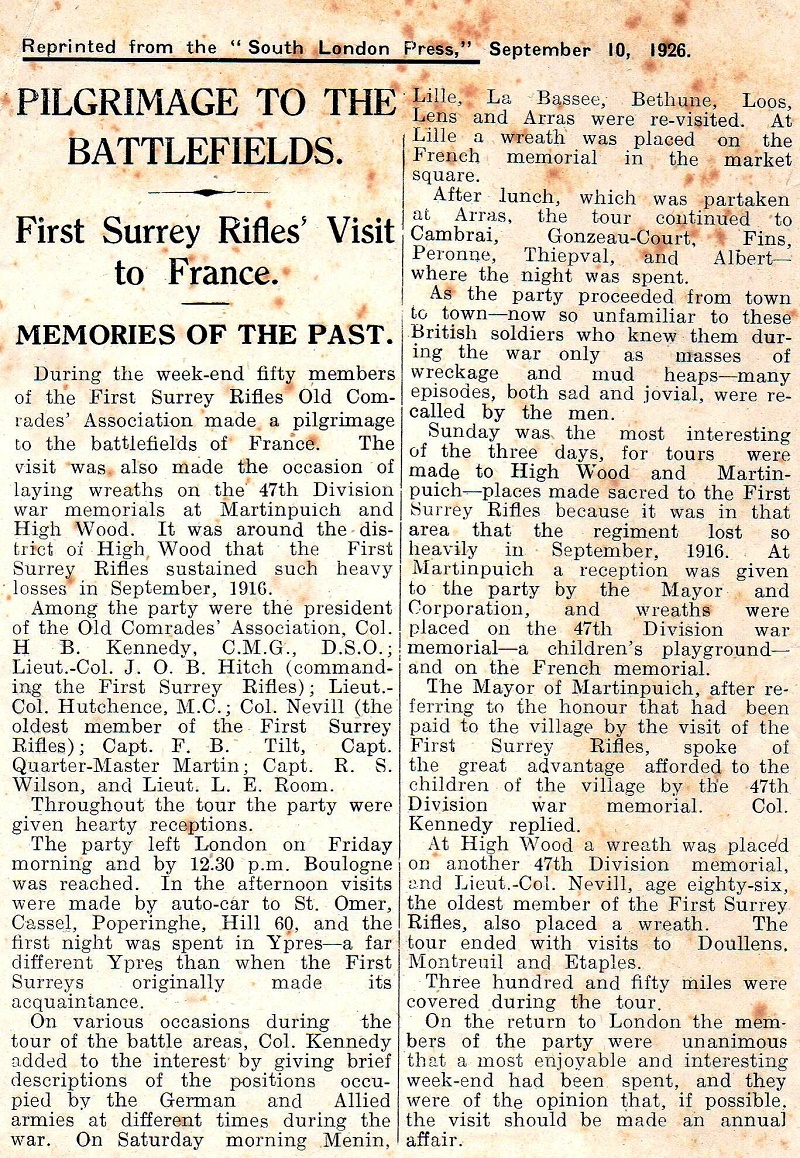 Amongst the postcards, there are ten group photos of about 45 men with my grandfather and the other staff seated in the middle. Only one is dated, and that is November 1917. Another one has a stamp on the back - '226th Infantry Brigade. NCO's school of instruction'.  This must have been taken while they were still at Frinton. At least 450 men must have passed through their hands. As the war progressed with so many casualties, it must have been hard for my grandfather knowing that so many of the men he was training would not come back.

A Quartermaster Sergeant, I discovered, was the second most senior non-commissioned officer in a company,  an administrative post responsible for buildings, supplies and transport. When I looked again at the photograph taken in Camberwell in 1914, I could see that he had three chevrons and a crown on his arm, which showed that he must have been a Quartermaster Sergeant right from the beginning of the war. Maybe he had already held the post in the Territorials, as he had trained with them for so many years.

The 1st Battalion of the First Surrey Rifles had left for France in March 1915. For the most part they were the men my grandfather had trained with every summer in the pre-war years. They were to fight with great gallantry and distinction, and also with tragic loss. They served on the Western Front in France until the end of the war. September 1916 found them taking part in the Somme offensive and on 15 September the Battalion was all but annihilated.

Of the 19 officers and 550 men who went into High Wood that day, only two officers and 60 men returned. It was to commemorate this day that the Old Comrades Association organised a battlefields tour 10 years later in September 1926. Although they suffered more heavy losses afterwards, it seems that this terrible day was a defining moment for them.

The Old Comrades covered a huge number of miles on their tour in a very short space of time. For the men who were returning to the places they had fought in, it must have been a very poignant trip, especially when they remembered their many friends who had lost their lives. It made me realise that if my grandfather had been allowed to go to France with them, it is very likely that he would not have come back, and my mother's life would have been very different. Despite the fact that he had not been able to serve with the First Surrey Rifles for most of the war, he clearly felt a strong allegiance to them, and he remained an enthusiastic member of their Old Comrades Association for the rest of his life.

Mary Chandler began researching her family history over 30 years ago. She loves piecing together the stories of her ancestors' lives and has learnt about all sorts of interesting subjects along the way.