The Sandawe are a people from north-central Tanzania where individuals in haplogroup L7 are found today. – International Institute for Tribal Studies and Research

Every once in a while a great discovery is made on a computer screen, even if the discovery is of an evolutionary event that is nearly as old as humanity itself.

That is the case for the recent discovery of mitochondrial DNA (mtDNA) haplogroup L7, an ancient lineage from eastern Africa just announced in a new article published in Nature Scientific Reports, write Family Tree DNA.

The unique DNA markers that define this haplogroup, or shared lineage, were passed down from mother to daughter to granddaughter—never through fathers—for 100,000 years. To date, only nineteen individuals out of several hundred thousand analyzed carry these unique DNA markers. Thus, it is one of the rarest and most ancient human groups on Earth.

To set the stage, we need to travel back 100 millennia to a time when humans lived as hunters and gatherers and were mostly confined to Africa. At that moment, the continent was experiencing widespread volcanic activity and major bouts of drought. It is possible that a few groups successfully left Africa at that time. But if they had, the Arabian Peninsula would have been as far as they would reach before entering the land of Neanderthals and Denisovans, our distant cousins. East Africa’s Great Rift Valley and lakes were home to most of our hominin ancestors and likely the hub of human progress. Our species, armed with new hunting techniques, as well as early fishing and art, was growing in numbers and spreading across the region. 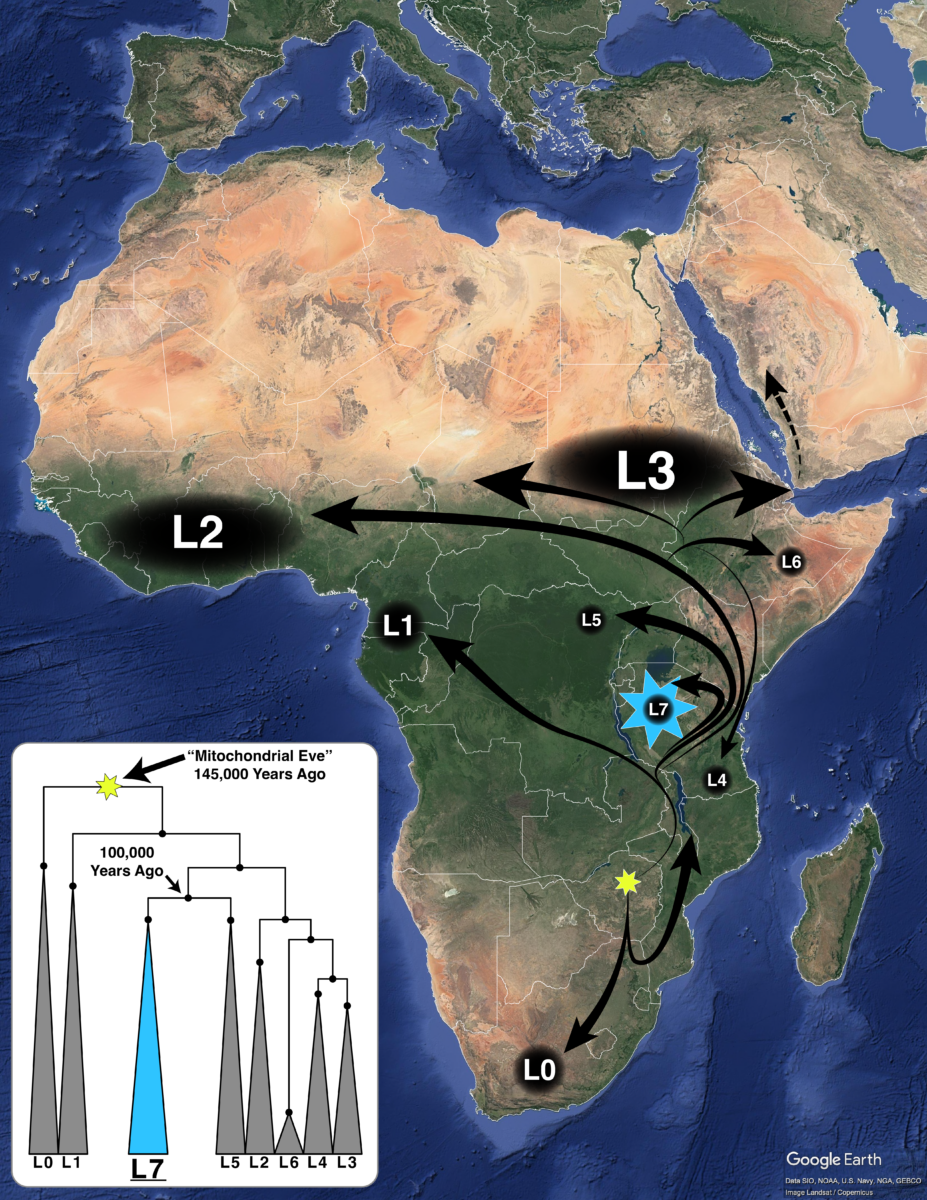 One group (L0) ventured south and east and became the ancestors of Khoisan-speaking groups in southern and southeastern Africa, while another (L1) moved west into the Congo. Yet around 100,000 years ago, one group (L7) split apart from the rest, and their lineage survived in eastern Africa just long enough to be discovered.

In 2020, a group of four scientists, leading the newly formed Million Mito Project (MMP), came together with the mission of analyzing and re-organizing all of the known mtDNA sequences from across the globe. In doing so, hundreds of thousands of full mtDNA sequences were analyzed, nineteen were found to not fit the known human evolutionary structure. They were so distinct from other lineages that the team had to check and recheck their results. These nineteen people carry mtDNA which is a relic from a bygone era in ancient Africa.

What soon became apparent was that these nineteen people shared two DNA mutations with one another, and all of them shared only four mutations from the ancient haplogroup L5. The similarities with L5 ended there. This was a rare group that had either been mislabeled for years, or published as belonging to an unknown haplogroup. Now we know it, can match it, and can finally name it haplogroup L7. Naming it L7, as opposed to a sub-group of L5, was the only way to preserve the rest of the current African haplogroup names, while still correcting the evolutionary tree structure.

That process is where most of the work remains for the Million Mito Project. How do we update the existing tree, shifting existing and adding newly discovered branches, while still preserving most haplogroup names that scientists have published, relied upon, and DNA-testing companies have already identified? This is the first paper published by the MMP team, but expect more to come in the near future.

Today, haplogroup L7 is found primarily in East Africa, predominantly in Tanzania, Ethiopia, and Kenya. A few lineages have also been found outside of the region in South Africa, as well as Yemen, Jordan, and the United Arab Emirates. However, further analysis suggests that these may be recent arrivals in those other countries and that East Africa is where L7 truly originates. That said, the possibility remains for new testing in the Middle East to show that L7 and other African lineages left Africa before the great human exodus 60,000 years ago. We expect that future work in southeast Africa may add new twists to the story. For example, one single L7 sequence (L7a*)  that traces roots to South Africa is 80,000 years apart from all other L7s discovered! That is the most unique mitochondrial DNA lineage ever found in a living person. The emphasis is on “living,” because new ancient DNA research on a 16,000-year-old individual unearthed in Malawi found that it shared a few DNA markers with this otherwise unique South African L7a* lineage. This is a fascinating and undoubtedly evolving story about early human evolution.

Among the few individuals where L7 is found today is the Sandawe from Tanzania. The Sandawe are a people from north-central Tanzania who live in small tribal groups and still practice a hunter-gatherer lifestyle. Additionally, the Sandawe speak a click-based language, which is a unique language form practiced by making various sounds through the flicking of the tongue. Click-based languages are spoken today by only a few groups scattered across eastern and southern Africa. Some anthropologists believe the practice of click-based languages is a window into our distant past as a species. Early click-based language speakers may have been experimenting with new sounds as a way to communicate with one another. Ancient variations of these sounds may have eventually evolved into vowels, consonants and syllables, and then possibly words. In other words, just as L7 is a living DNA relic of ancient human history, so perhaps are these rare click-based languages.

Be a Part of Human History Research

The recent discovery of haplogroup L7 also shows the need in genetics and even anthropology to question each other’s research and reanalyze work. Researchers have been using DNA to help shed light on ancient human history for decades, yet this research is a reminder that there is still much to be found. And mtDNA, although limited in its strictly matrilineal inheritance pattern, exists in all humans today, and likewise existed in all of our ancient human ancestors. That small molecule still holds hidden clues about our shared history, and those mtDNA sequences on a computer screen can set the course for discovery. Learn more about mtDNA by taking a full mtDNA test and joining the Million Mito Project as we continue our research in human history and genealogy!

You can read the paper here.

Dr. Miguel Vilar was a Senior Program Officer for the National Geographic Society (NGS) and Lead Scientist for NGS’ Genographic Project, a multi-year anthropology study that aims to map human migration patterns by collecting and analyzing DNA samples from hundreds of thousands of people from around the world. By training, Vilar is a molecular anthropologist and science writer.

Vilar earned his Bachelor of Arts in Anthropology from Haverford College and Master of Arts in Journalism from Columbia University.  After a few years of science writing he returned to school to earn his Master of Arts and Doctorate in Anthropology from Binghamton University. After earning his doctorate, Vilar worked for the University of Pennsylvania leading several field projects across Latin America for the Genographic Project’s North America Research Center.

Today, his fieldwork takes him to Micronesia, Melanesia, South and Central America, and the Caribbean; and in the laboratory he studies the modern genetic diversity of human populations from the Pacific, South America, and the Caribbean. He also researches the genetics of domestic animals (pigs, chickens, dogs and horses) and the cultural and biological implications of animal domestication on human evolution, population history and migration.

In addition, Vilar is a professor of Biology and Anthropology and publishes in both anthropology and genetics academic journals, as well as in popular print and online magazines. Vilar is also a public speaker, writer, and consultant with Family Tree DNA.